Sumatran tigers (Panthera tigris sumatrae) are on the brink of extinction due to habitat destruction, human-tiger conflict, and poaching. They once roamed throughout the Sunda Islands in Western Indonesia, however now only a few remain on the island of Sumatra. They are classified as Critically Endangered with less than 400 individuals estimated still surviving in the wild. They are the only tiger found in Indonesia after the Balinese and Javanese tigers were pushed to extinction in the 1900s. Sumatran tigers live in rainforest habitat and rely on large tracts of forest for survival.

The Sumatran tiger is the smallest of the living tiger species. The stripes of the Sumatran tiger are closer together and it has darker orange fur than other tigers to allow it to blend into its tropical rainforest habitat. Just like the human fingerprint, tiger stripes are unique to each individual tiger. Sumatran tigers have distinctive mane-like hair growth around their necks and have long whiskers. Tiger whiskers are thick, highly sensitive and are connected to the nervous system. Whiskers can detect even the slightest change in the air or wind and so provide important information to a tiger regarding its surroundings, including a possible food source. Whiskers can help a tiger judge the distance between two places and help to find their way through small spaces, especially in the dark. 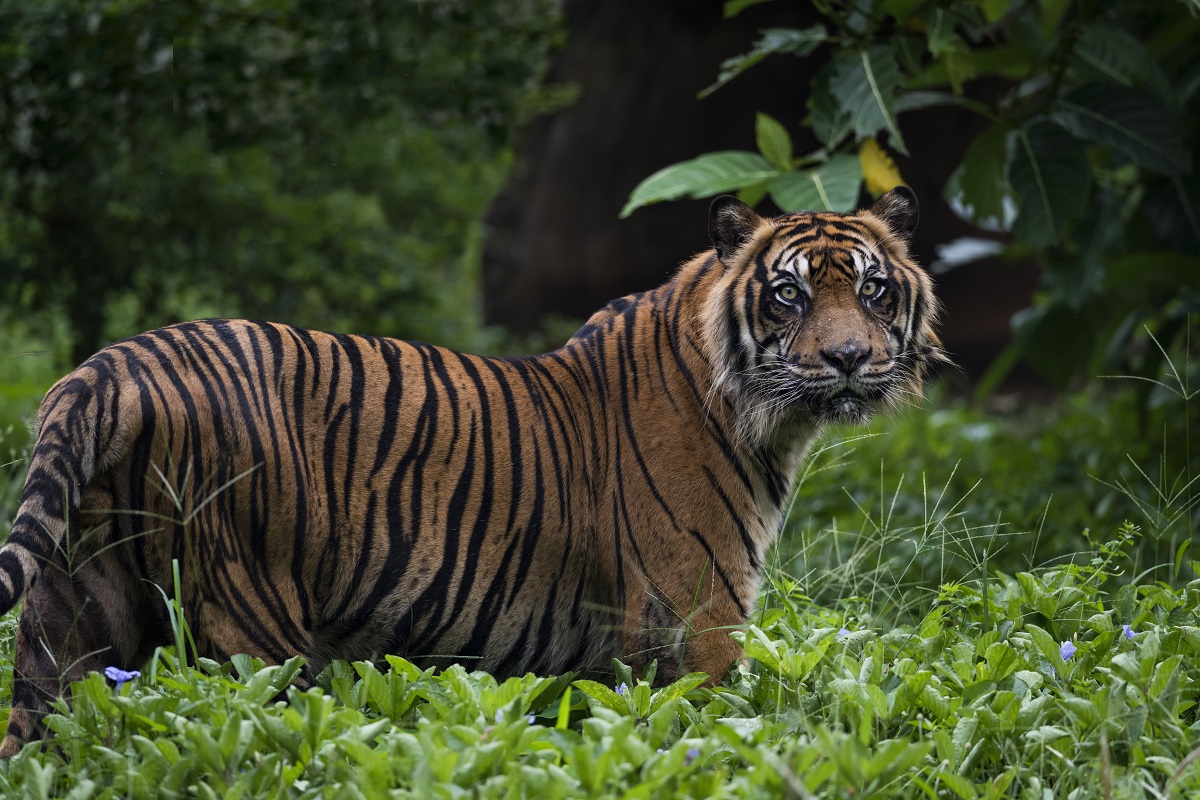 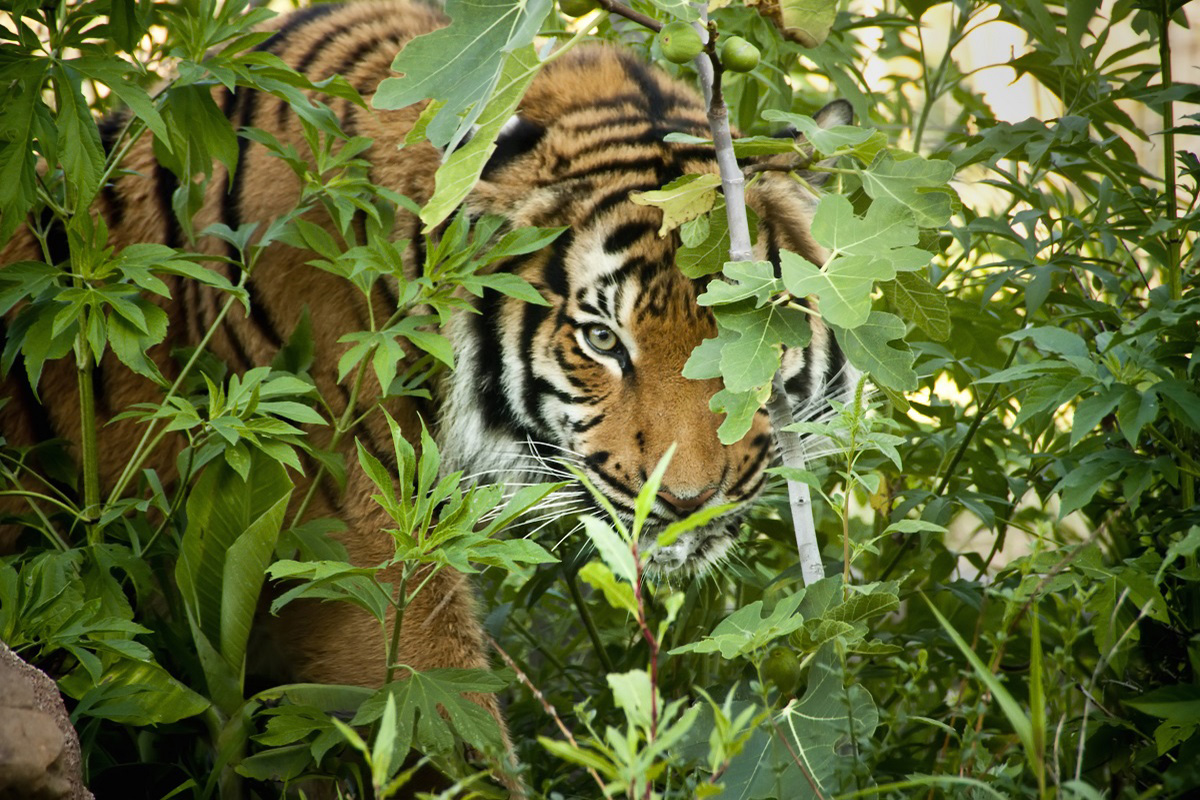 Sumatran tigers are the apex predator in their habitat. Like all big cats, they are obligate carnivores, meaning they are biologically dependent on a meat diet. They hunt numerous species including deer, wild pigs, fish, and macaques. Only about 10 percent of tiger hunts result in a successful kill. Once a tiger has caught an animal, it uses its powerful jaws to latch onto the throat of their prey and suffocate it to death. The sense of smell in tigers is not as powerful as some of their other senses and is not generally used for hunting. The sense of smell is mainly used for communicating with other tigers, including territorial boundaries and reproductive status.

Sumatran tigers are strong swimmers and have webbing on their paws to help them swim. They sleep for up to 18 to 20 hours a day. They have a range of vocalisations to communicate including roaring, snarling, hissing, and chuffing. Roaring is an aggressive vocalisation that can be heard up to three kilometres away. Chuffing is used to express contentment. 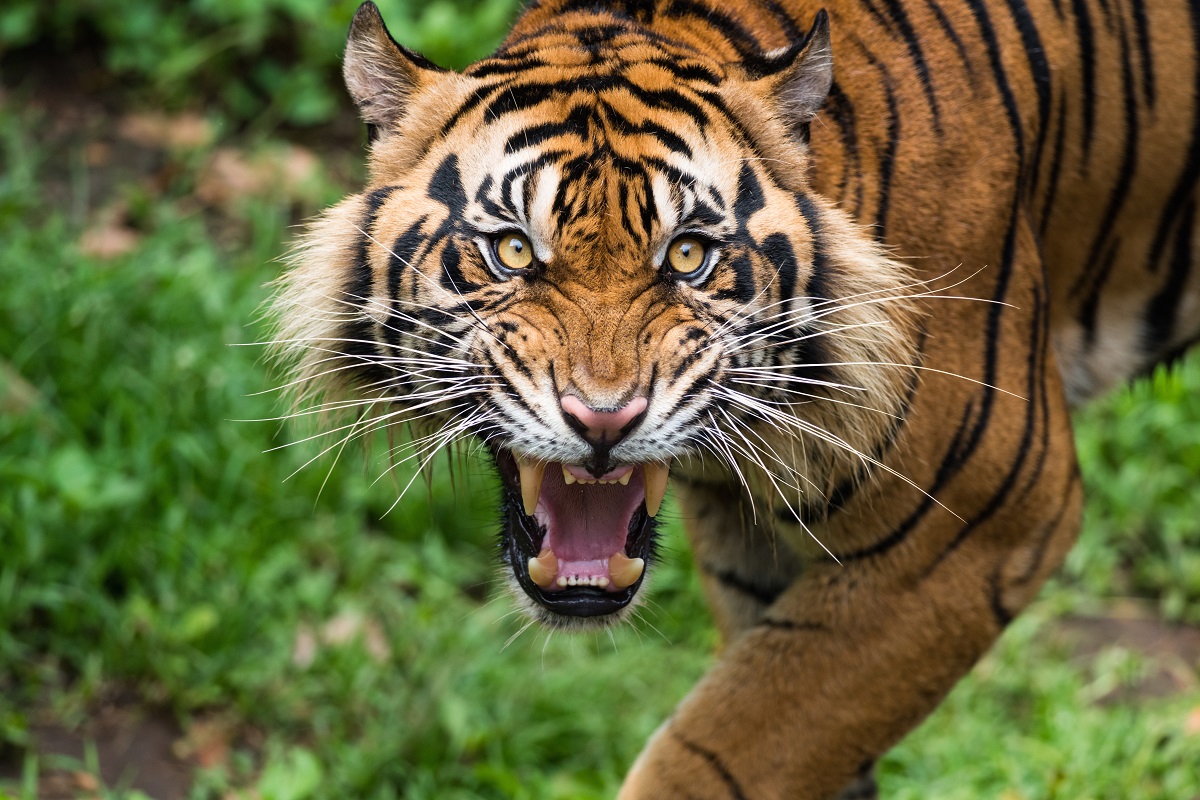 Tigers, especially females, are territorial and they mark their territory by spraying plants with their pungent urine. A female will do this when she is ready to mate to alert male tigers that may pass through her territory. Cubs are typically born in a secluded area central to the female’s home range. Two or three cubs are usually born in a litter and only one or two cubs normally survive the first two years of life. Cubs are born blind and depend exclusively upon their mother for nourishment for the first five or six months.

When the cubs are about six months old, they accompany their mother on her hunting expeditions so they can feed directly on her kills. In the following months, they slowly learn how to hunt and kill their own prey. Male cubs grow faster than their female siblings and by one year of age are noticeably larger and more independent, sometimes spending the day away from the mother. By 16 months of age, tigers have fully developed canines, but they are not very efficient at killing prey. By 18 months of age, both sexes start making their own kills. At this age, males will leave to find their own territory. Females tend to stay longer with their mother. The father plays no part in the upbringing of the cubs.

The young male tiger faces his most challenging time when he leaves his mother and seeks to find his own territory. Resident males have been observed to tolerate subordinate males in their range, but in general, resident males exclude other males. Most young males are forced to live in less favourable habitat, biding their time until they can displace a resident male and gain their own territory. This usually occurs when the resident male gets too old or suffers severe injury.